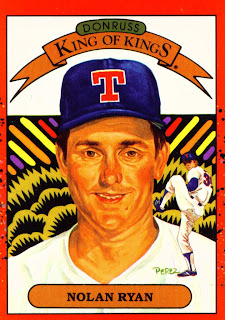 Nolan Ryan, shown here on card 665 of the 1990 Donruss set, played nine years for the Houston Astros before joining the Rangers in 1989. That information is easily discoverable if you look Nolan up on Baseball-Reference.com. Right next to the Astros' name is the notation "NL".

That notation will apparently be out of date starting in 2013. Yesterday Commissioner Bud Selig announced the move of the Astros to the American League West starting in 2013. To be honest, this move puzzles me.

Starting in 1962 the Astros have always been a National League franchise. They have lived and died in the National League. During their dominant years they were mainstays in the NL playoffs. Now they're going to the American League and not everyone's happy about it. One survey I saw referenced stated that up to 75% of Houston fans strongly oppose the move to the AL.

I can't say I blame them. As much as I prefer NL ball to AL ball I'm not sure how I would feel about the Rangers switching leagues. If they were already in the NL I am sure I would oppose a move. Apparently the vast majority of 'Stros fans agree with me. So why move them?

Of course the Brewers weren't for sale. That means their owners weren't over a barrel to force the move. Also, Bud Selig never owned the Astros. That's probably the real reason Houston's making the move. Commissioner Selig can give any reasons he wants for the Astros to move but I can't see it. Move the Brewers back to the AL Central and slip the Royals over to the West. Those moves would likely grieve KC fans but they make more sense than what's being done.
Posted by Spiff at 9:36 AM

I agree. MLB needs to move Milwaukee back. But Selig wouldn't let that happen.

Selig is a spineless buffoon. If having the same number of teams in each league is the way to go, why was Milwaukee moved in the first place?

It should have been the Brewers, without question.