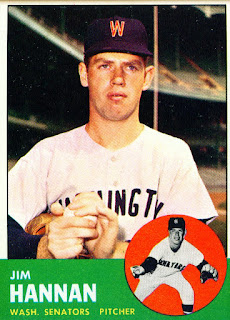 All but two of Hannan's appearances for Washington were out of the bullpen and he would end up with 27.2 innings to his credit. Where the season got odd was in his numbers. Jim's ERA jumped 1.57 over 1962 to 4.88. His WHIP dropped though by ten points to 1.446. His strikeout to walk ratio also climbed slightly while his strikeouts per nine innings average dropped almost as sharply as his walks per nine innings.

While 1963 had been a somewhat mysterious season for Hannan what he needed to get done before 1964 was no mystery. He needed to keep his WHIP down and lower his ERA. He also needed to keep dropping the walk totals while raising the strikeouts. If he could get those goals accomplished he just might be able to carve out a permanent spot for himself on the Senators pitching staff.
Posted by Spiff at 12:28 PM