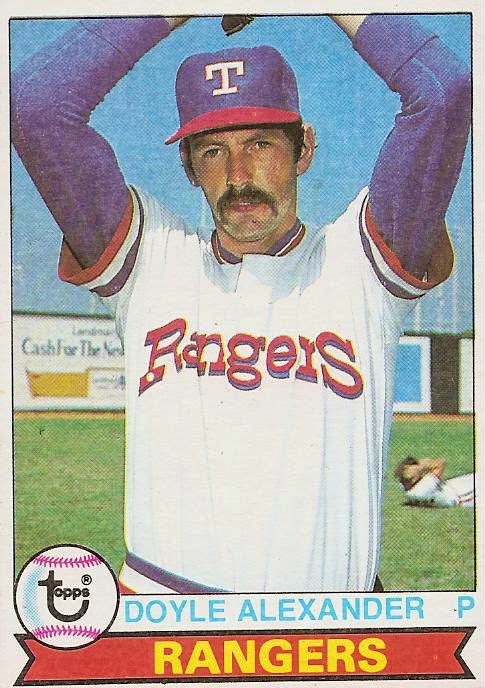 Time to move on from the 1978 Topps team set to the 1979 Topps team set. 1979 would be the first time in three seasons the Rangers finished below second place. Their record dropped to 83-79 under manager Pat Corrales. It began a period of steady decline for the club with only a couple of bright years during the 1980's.

Doyle Alexander leads off the team set on card 442 of the 1979 Topps set. Couple of things about this card. One, you gotta like Doyle's mustache. It has the old cowboy/gunslinger look to it. Second, I have no idea who that is doing sit-ups in the background.

Alexander had been brought on board just previous to the 1977 season and had done well. His performance dipped in 1978 and he was looking for a rebound season in 1979.

Still primarily a starter, Doyle started 18 of the 23 games he appeared in for Texas in 1979. He pitched 113.1 innings, down significantly from the previous year. Alexander's ERA totaled to 4.45, second highest in the starting rotation, and his WHIP came to 1.615. That WHIP was .207 higher than the year before and was the highest of any of the regular Rangers pitchers. Alexander also issued 69 walks while striking out just 50 opposing batters. His strikeout to walk ratio tumbled to 0.72, again lowest among Rangers regulars. Unsurprisingly, he ended the season with a 5-7 record.

1979 was not the rebound season Doyle Alexander needed. After his solid 1977 campaign his numbers had steadily eroded over the next two seasons. Texas was looking to stay competitive and his recent numbers put Alexander's future with the team in doubt.
Posted by Spiff at 11:29 AM