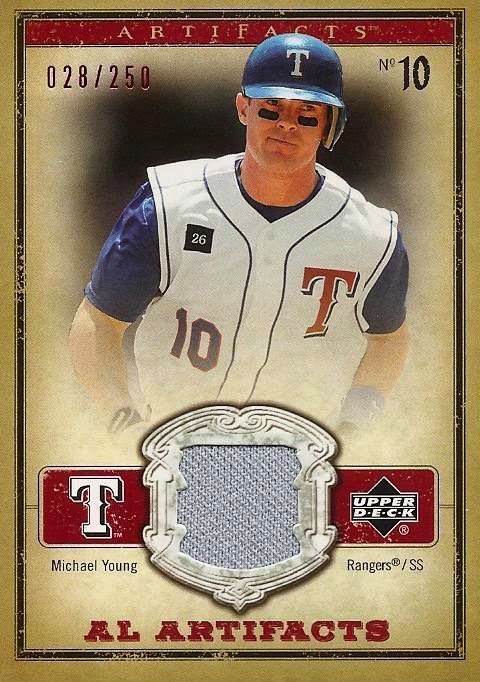 Well, so far Spring Training seems to be going well for the Rangers. The worst news to this point is that Jurickson Profar will be undergoing shoulder surgery and missing another season. The surgery is related to the same injury that caused Profar to miss last season. Looks like Roughned Odor will not have as tough a time as expected in nailing down the second base job.

The other news out of Surprise is related to how Matt Harrison is progressing and the fact that all players are now in camp. Of course, Yu Darvish is getting mobbed by the Japanese media again this year.

Michael Young, shown here his 2006 Upper Deck Artifacts AL Artifacts #AL-MY card, is also in camp. This time as an instructor rather than player. Ivan Rodriguez should also be putting on an appearance at some point to work with the catchers. A few other former Rangers will probably be in and out as well.

So far so good, it seems. I still have my fingers crossed but can't help hoping for a bounce-back season and possibly a contending team. Anything with the majority of the team healthy would be a welcome improvement though.

I feel bad for Profar. He just can't stay on the filed.