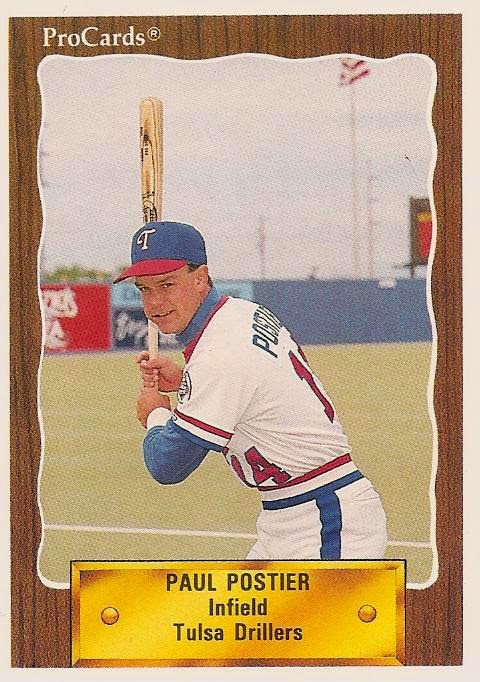 Paul David Postier, shown here on card 1164 of the 1990 ProCards Tulsa Drillers team set, was drafted by the Rangers in the 17th round of the 1986 June draft. He started his pro career the same year. Four seasons later in 1990 Paul found himself preparing to start his second season with Double A Tulsa. That's not exactly shooting through the system.

As the front of Postier's card indicates, he was mainly an infielder. In 1990 he appeared at first and third base for the Drillers and in the outfield for ten games as well. He was not a regular starter at any of the positions he played.

In the 32 games Paul played at first base he handled all 283 chances he saw without an error. At third base he committed two errors over 46 games for a .985 fielding percentage. He was flawless in the ten games he appeared in the outfield.

Interestingly, Postier also pitched for Tulsa in five games. That indicates either a lot of blow-outs or perhaps an attempt to look at transitioning to pitching. Paul had pitched before, in two games with Single A Gastonia during the 1987 season, but not in the previous two seasons. The lack of practice didn't seem to hurt him though. He posted a 1.35 ERA and a 0.900 WHIP in 6.2 innings for the Drillers.

Paul made 319 trips to the plate over 89 games for the Drillers in 1990. He struggled to a .236 batting average and a .263 on-base percentage. Both were attributable to his propensity to strike out. He whiffed 55 times while working just 12 walks. Couple that with his lack of power - just eight doubles and one triple - and the outlook was grim indeed.

Paul Postier was a versatile player. He could play multiple positions fairly well and could even pitch effectively when needed. The problem was he couldn't hit. The Rangers were going to bump Paul up to Triple A Oklahoma City for the 1991 season but he was going to have to find his bat fast if he wanted to stay there or possibly get a shot in Arlington.
Posted by Spiff at 6:28 PM