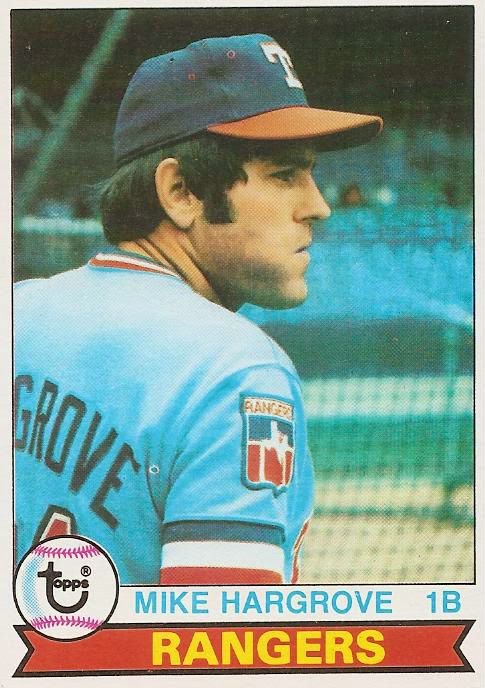 Little house-keeping. Starting today my access to a scanner is going to be limited for several weeks. I'll be around, just not able to scan cards for current posts. As such I have tried to pre-schedule as many posts as possible to keep things going. I also have a few cards pre-scanned that may allow me to be able to post with current Rangers news. However, most of the posts will not match current happenings. My apologies for that but I hope you enjoy what I have managed to put together.

Getting back to the theme of the late 1970's Rangers roster upheaval. Today it's Mike Hargrove on card 591 of the 1979 Topps set. This is actually one of my favorite cards of Mike Hargrove, seems like his intensity is really evident here.

Hargrove was the first Rookie of the Year winner for the Rangers back in 1974. Following the 1978 season, he was one more player being shipped out in the merry-go-round of trades.

On October 25, 1978 the Rangers sent Hargrove, Kurt Bevacqua, and Bill Fahey to the San Diego Padres in exchange for Oscar Gamble, Dave Roberts, and $300,000. The Padres sent Mike to Cleveland in June of 1979. He would stay there until he retired following the 1985 season.
Posted by Spiff at 11:51 AM