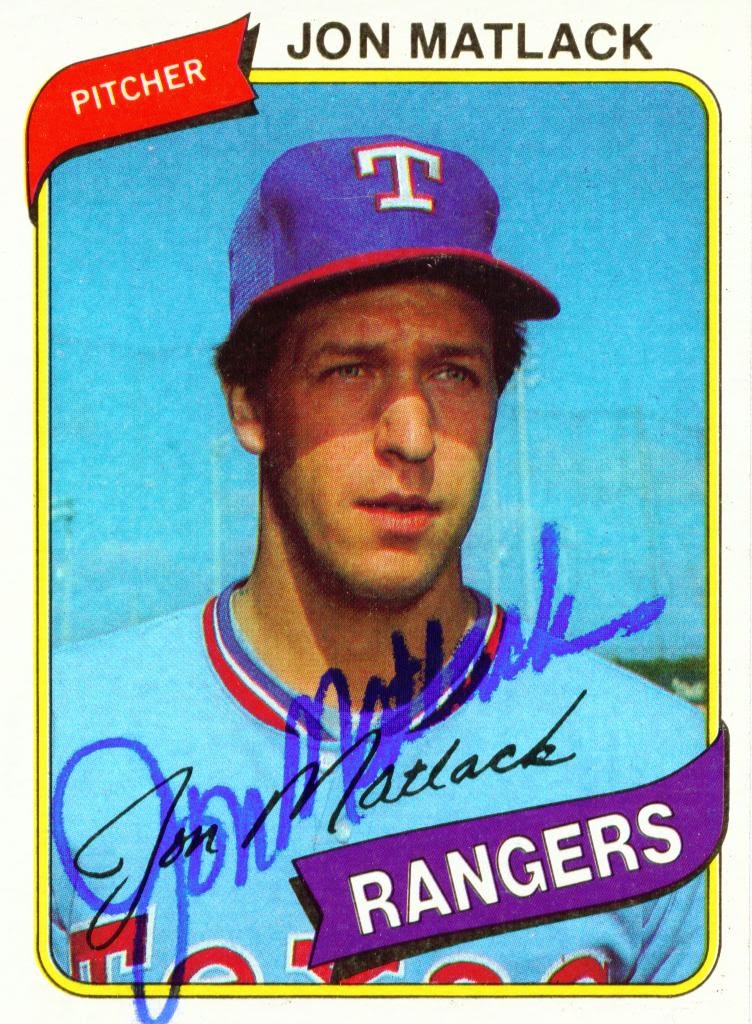 So, Nick Martinez lost his scoreless streak in the second inning of Tuesday's game when he allowed a run. That ended his streak of innings without an earned run to start the season at 15. Yu Darvish had a streak of 16 innings to start off last season. Jon Matlack, seen here on a 1980 Topps card he signed through the mail in 2010, holds the team record with 19 innings of no earned runs to start the 1980 season. Matlack's record will stand for at least another season.

Martinez got the win on Tuesday. The one run in the second inning was the only headway the Diamondbacks made. Meanwhile the Rangers bats unloaded for seven runs. Prince Fielder even got a home run, his first since last May. Hopefully it's a sign that he's getting his swing back.

Last night was a whole other story. To begin, Yovani Gallardo got the start. That was not encouraging in my mind. After all, the pitcher Arizona was starting beat Clayton Kershaw and Madison Bumgarner in his last two starts. Whatever you may want to say about Gallardo, he's not even close to either of those guys. Sure enough, Yovani allowed five runs, three of them earned, over five innings en route to a 8-5 Rangers loss. There was some sloppy fielding involved as well but Gallardo's pitching was the main culprit. About the only encouraging thing was that the Rangers bats showed up for a second night in a row. I think that's the first time this season they've managed to hit two games in a row. It would be nice if it means the offense has finally got things in gear.

Texas is off tonight and facing the Angels in Anaheim tomorrow. Wandy Rodriguez is up from Triple A to make the start in place of Ross Detwiler. Detwiler is supposed to use the time off for extra bullpen sessions to try and figure out what he is doing wrong when he pitches. Normally I wouldn't be thrilled with a worn out veteran coming up from the minors to make a start. Can't say I'm really thrilled now but at least the Rangers may have a chance to win. With Ross Detwiler throwing batting practice to opposing teams there's no chance at all. Maybe Rodriguez can put it together for a few innings and keep the team in the game long enough for the offense to do their thing.
Posted by Spiff at 11:22 AM