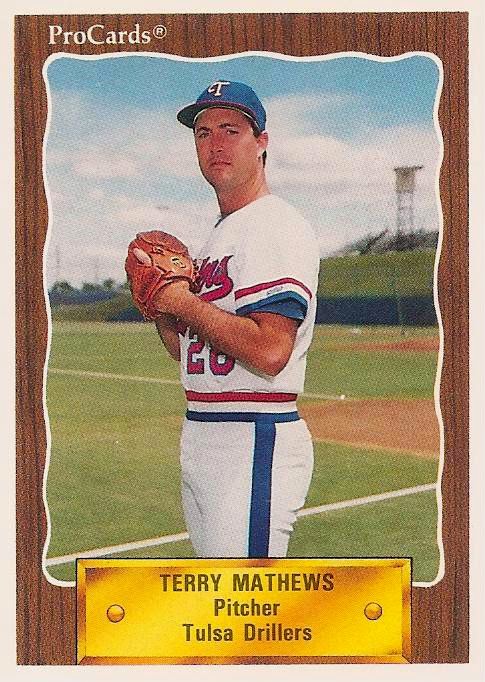 Getting towards the end of the 1990 ProCards Tulsa Drillers team set. Terry Mathews, shown here on card 1171, is the last player featured in the set.

The Rangers selected Mathews in the fifth round of the 1987 draft. He began his pro career the same year with Single A Gastonia. He spent 1988 and part of 1989 with the Single A Charlotte Rangers before moving up to Double A Tulsa midway through the 1989 season. He stayed at Double A for the beginning of the 1990 campaign.

Serving strictly as a starter, Mathews appeared in 14 games for Tulsa and pitched 86.1 innings. He put together an unimpressive 4.27 ERA and 1.436 WHIP. That translated to a 5-7 record.

In spite of his less than impressive numbers, the Rangers moved Terry up to Triple A Oklahoma City mid-season. For whatever reason, the promotion worked. Mathews appeared in 12 games for the 89'ers, all but one as a starter. He tossed 70.2 innings and lowered his ERA to 3.69 while improving his WHIP slightly to 1.358. Those improvements didn't keep him from a 2-7 record.

Mathews' numbers may not have been overwhelming but, in the pitching starved Texas system, they were good enough to keep him at Triple A. Terry was slated to start the 1991 season with OKC. If he could perform well enough he just might get a chance to see Arlington before the 1991 season ended.
Posted by Spiff at 1:30 PM