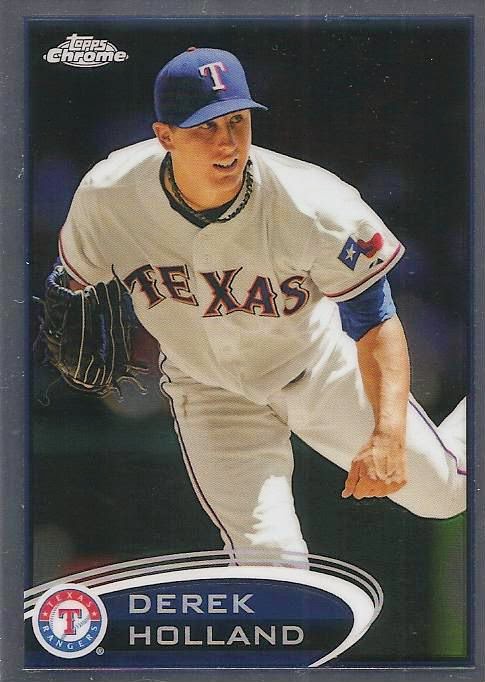 Well, Derek Holland, shown here on card 92 of the 2012 Topps Chrome set, got the home opener start yesterday for Texas. He lasted one inning. During that inning Dutch never touched 90 with his fastball. That brought alarm to my mind as well as to manager Jeff Banister. In the second inning the Rangers brought in Anthony Bass to take over on the mound. Shortly after the game the Rangers announced Holland will probably miss two months with a left shoulder strain.

Meanwhile Shin-Soo Choo left the game in the second inning with back spasms. He's supposed to be back before long. Ryan Rua won't be though. He left after five innings and appears to be headed for the Disabled List with a sprained ankle.

The 5-1 loss the Astros was bad enough. The injuries are worse. First Darvish, now Holland and Rua. If the Rangers remain anywhere near .500 with the losses to the rotation, it will be a miracle. Unfortunately the nagging fears from last season are now starting to come to the fore. 2015 was supposed to be a comeback year for the Rangers. Is it turning into a sequel of 2014 instead? I sincerely hope not but it seems the club is well on the way to a repeat. Could be a long summer in Arlington if the guys don't figure out a way to stay healthy.
Posted by Spiff at 10:56 AM