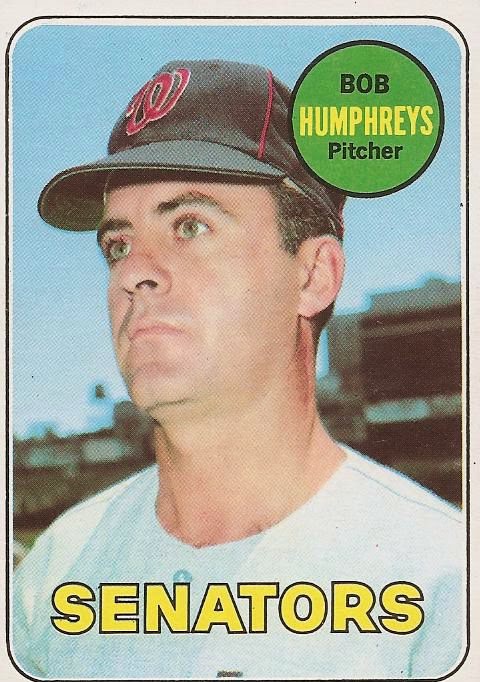 Bob Humphreys, shown here on card 84 of the 1969 Topps set, was entering his fourth season with Washington in 1969. The Senators were hoping to see Humphreys build on his 1968 effort and keep the ERA and WHIP moving down.

Primarily a reliever, Bob had only three starts in his career prior to 1969. He would not add anymore that season as all of his 47 appearances were in relief. He finished 14 games, picked up five saves, and ended with a 3-3 record. Over 79.2 innings pitched Humphreys lowered his ERA .64 points from the previous season to 3.05. That was a move in the right direction.

All in all, 1969 was a mixed bag for the 34-year-old Bob Humphreys. On the surface he was moving on the right direction with his ERA. Most of the other important numbers pointed to a problem though. It was hard to tell for sure exactly what was going on. The Senators decided to take a wait and see approach. Bob Humphreys would start the 1970 season on the Washington roster but he had work to do if he wanted to stay there.
Posted by Spiff at 1:00 PM