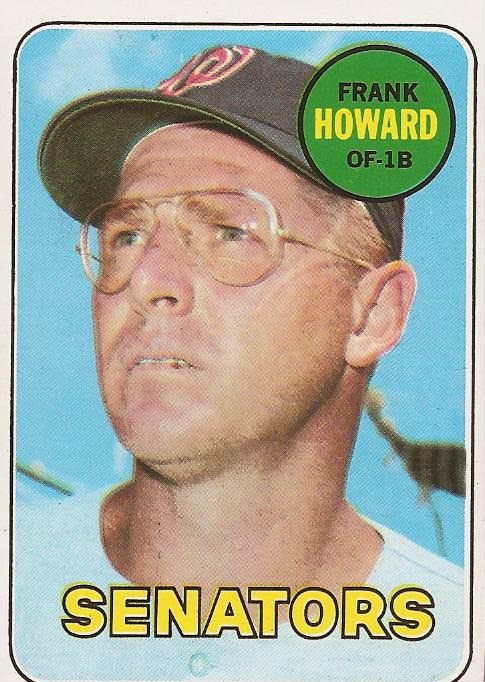 Like last week's card, my copy of card 170 in the 1969 Topps set does feature all the borders. It's off center though so the scanner cut off the bottom border.

Coming into 1969, Frank Howard was the big cog in the Senators offense. A league-leading 44 home runs in 1968 had placed him squarely in the top tier of American League sluggers. Washington fans were hoping the bombs would continue to fall in the nation's capital.

Frank continued to play mainly left field for the Senators, 114 of the games he played in were in the outfield. He committed four errors over 898.1 innings for a .974 fielding percentage. That was a significant improvement over the previous season and brought him to within five points of the league average. Howard also put in 441.1 innings over 70 games at first base. He had 10 errors there for a .980 fielding percentage, 12 points below the league average.

Washington didn't have Frank Howard on the team for his defense though. Over the course of the season Hondo made 702 plate appearances (team high) over 161 games (most on the team). He put together a .292 batting average (team best) and a .402 on-base percentage (second best on the club). Contributing to the on-base percentage was the fact that he walked 102 times (team high) and was given free passes another 19 times (team high). Oddly for a slugger, those walks outnumbered his 96 strikeouts. Howard ran his slugging percentage to .574 (team best) with his 17 doubles, two triples, and 48 home runs (team best). He knocked in 111 runs for the Senators (team best) and scored 111 of his own (team best).

Washington fans and management were elated with Big Frank's 1969 season. Expectations were high for 1970.
Posted by Spiff at 10:00 AM