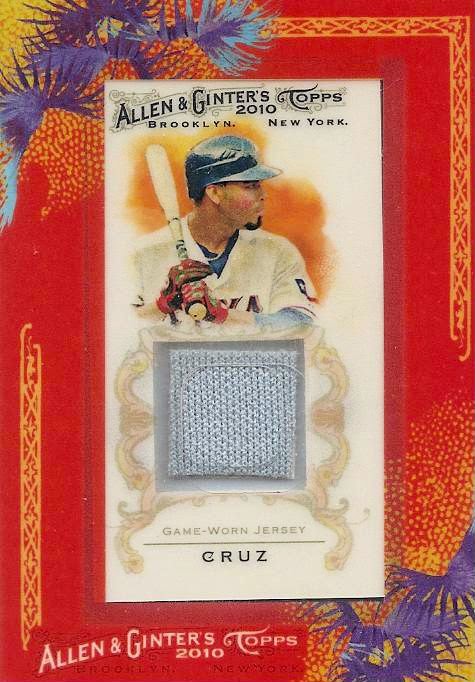 The past couple of weeks have been like a delayed Christmas for me. Surprise packages of cards arriving from awesome guys like Jeff over at 2x3 Heroes. A couple of days ago a bubble mailer arrived from Jeff. Inside was greatness.

Jeff sent me 23 Rangers cards ranging from the early 90's to 2014. The lot included some base cards, inserts, and even two game-used. One of the game-used was this 2010 Allen and Ginter Relics card of Nelson Cruz. The other was my first ever Adrian Beltre game-used card. It will be saved for an appropriate posting during the upcoming season.

All told I think Jeff hit holes in my collection with at least 14 of the cards he sent. If his White Sox can win games like he fills in other folk's collections, the rest of the league better watch out. Thanks a ton for the cards Jeff. I'll see what kind of return I can come up with sometime soon.
Posted by Spiff at 11:01 AM

That was a return for a package you dropped on me. It was fun digging thru the Rangers cards to find stuff on your need lists.

Jeff is a pretty cool dude!