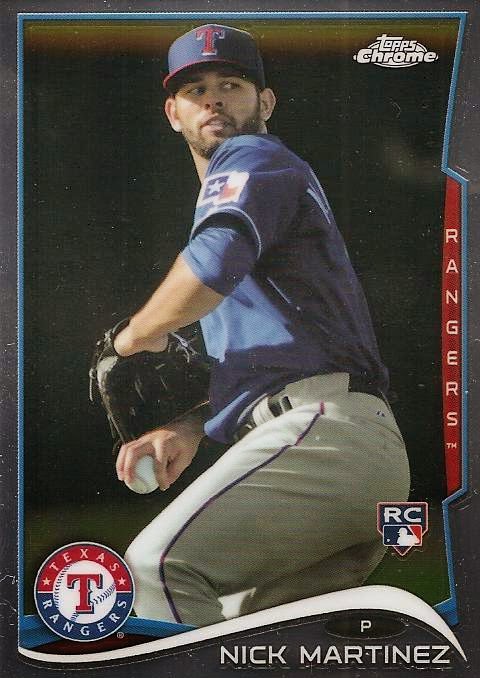 Thanks to some great pitching, and the bats finally waking up, the Rangers left Oakland yesterday following a 10-1 blowout that split the series 2-2.

Youngster Nick Martinez, shown here on card 65 of the 2014 Topps Chrome set, got the start. Martinez showed some high potential last season and won a spot in the rotation this year. Last night he went a ways towards proving he deserves the spot.

Nick went seven innings and allowed just four hits and two walks while striking out five. The A's didn't get a single run off him. The lone Oakland run came against reliever Keone Kela in the eighth while Roman Mendez worked a scoreless ninth to end the game.

While the pitching was doing their part, the dormant offense seemed to wake up. After getting shut out in two of their first three games and having no extra base hits, things exploded. The Rangers got home runs from Shin-Soo Choo, Adrian Beltre, Mitch Moreland, and Rougned Odor. Ryan Rua chimed in with a double. Everybody in the starting lineup scored except Prince Fielder and Elvis Andrus.

Great to see a game like this early in the season. If Martinez can continue to pitch well, Colby Lewis performs like he did in his first start, and Derek Holland delivers, the season could be a fun one to watch. Now that the offense has their first big eruption out of the way hopefully they will relax and perform up to their potential.

This afternoon is Texas' home opener against the Astros. Dutch gets the start and he's pretty excited to get going. If he can keep his late last season mojo going Rangers fans will have a lot to be excited about as well.
Posted by Spiff at 11:30 AM