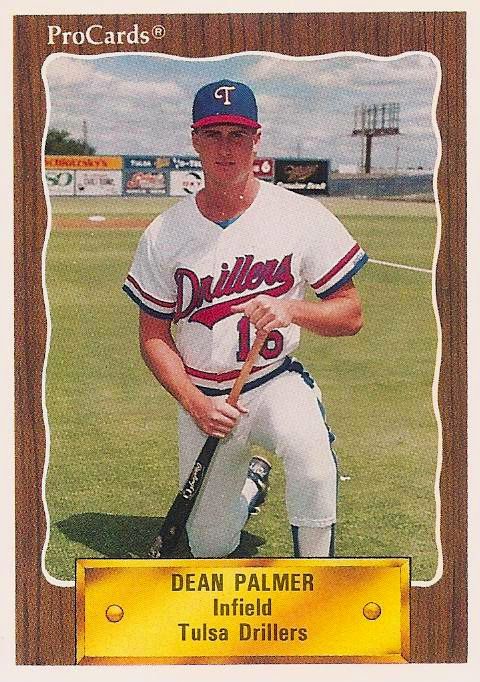 What a mixture of feelings about yesterday's game. Great to see the team battle back from four runs down and tie it. Frustrating to have them muff some chances to win. Heartbreaking to watch it slip away in extras. Anyway, time to look back at a former Ranger as he neared the end of his minor league career.

Dean Palmer appears today on card 1170 of the 1990 ProCards Tulsa Drillers team set. A third round pick for Texas in the 1986 draft, Palmer spent most of 1989 with the Drillers before being called up to The Show when the rosters expanded in September. He struggled over the course of the 16 games he appeared in and the Rangers decided at least another season in the minors was in order. They slated Dino to start the 1990 season at Double A with the Drillers.

Palmer's time with Tulsa in 1990 was short. He appeared in just seven games, all at third base. His three errors led to a .833 fielding percentage, poor at best. His offense was better though as he put together a .292 batting average and a .414 on-base percentage over 29 plate appearances. He walked four times but struck out 10 - an ominous sign. Dean had power though, one triple and three home runs.

The Rangers bumped Palmer up to Triple A Oklahoma City for the rest of 1990. He appeared in 88 games total for the 89'ers. 57 at third base and 22 at first base. The rest were probably as either a pinch-hitter or designated hitter. Dean's .889 fielding percentage at third and his .978 fielding percentage at first showed that he still had a lot of work to do on his defense. He also struggled a bit at the plate with the increased competition.

Over 343 plate appearances Palmer managed a .218 batting average and a .271 on-base percentage. The dip in both was related to his propensity to strike out. He did so almost a third of the time, 106 before the end of the season, as opposed to his 20 walks. He still had power though as his 17 doubles, four triples, and 12 home runs indicated.

If the Rangers were looking for Dean Palmer to prove he was ready for the Majors in 1991 they were disappointed. He was making progress but wasn't quite there yet. He needed a little more time on the farm. Maybe a whole season, probably less. He would be assigned to Triple A OKC for the start of the 1991 campaign.
Posted by Spiff at 10:00 AM