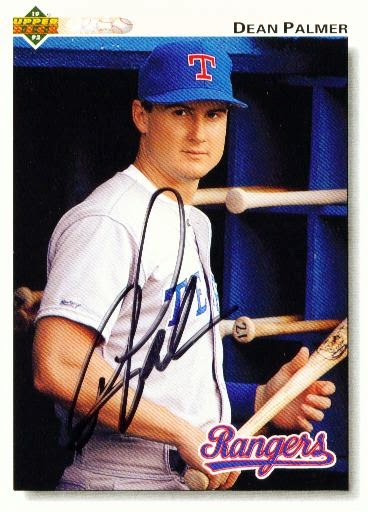 Just because. Dean Palmer on a signed 1992 Upper Deck card. Got this one back in the mail after sending it off to Mr. Palmer.

Well, the Rangers have lost two of their first three games in the 2015 season. Both losses have come in starts by pitchers brought in over the off season to bolster the starting rotation. The offense has yet to hit a home run and have only one extra base hit.

Not the most encouraging start to the season. It's only three games though and the Rangers have always struggled in Oakland. The lamented Yu Darvish has a losing record there I believe. If the guys can pick up a win this afternoon they will split the series and head home with an acceptable road trip. Things would be looking up in that case. That's the fine line separating a decent start from a terrible one.

There's a lot of fans who seem to be sounding the alarm already. Perhaps that's due to overly high expectations. Perhaps it's due to a desire to get rid of Jon Daniels. Maybe people just like to gripe. It's hard to tell and really doesn't matter. At this point a few more games are needed before any conclusive opinions can be reached. At least two starts by Gallardo and Detwiler would be nice to get a grasp on how they will perform. Bats get cold, a little time to let them get hot is not out of line.

I'm not saying this is a championship team. It may not even be a contender. It's just hard to tell for sure right now. Let's put the cover back over the panic button and take a second look.
Posted by Spiff at 12:15 PM