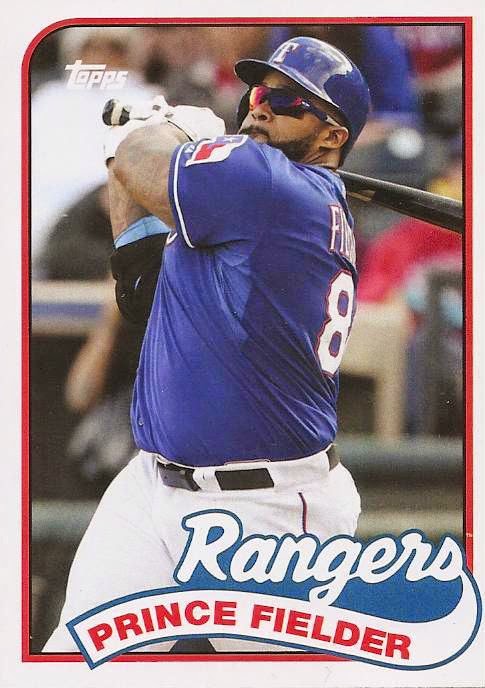 Yovanni Gallardo picked up his second win of the season last night in Seattle. He managed to last just over six innings while allowing six hits and walking two. It was his strongest start to date for Texas. The bullpen took over in the seventh and allowed just one run in the eighth to clinch the 3-1 victory for the first series opener win of the season.

On the offensive side of things, Robinson Chirinos hammered a solo home run, his second of the season. Chirinos also got a double, as did Elvis Andrus and Prince Fielder. Fielder picked up a RBI on his.

Interesting thing about Prince Fielder, shown here on card 196 of the 2014 Topps Archives set, he hasn't hit a home run yet. He has been getting on base though. With last night's 2-for-3 he's run his batting average to .419. He's also not striking out this season at the pace of previous years. If the home runs arrive as expected, and Prince keeps on being selective at the plate, this could turn into a stellar season for him.

Of course all was not good news yesterday. Mitch Moreland was scratched from the lineup an hour before game time with discomfort in his left elbow. Apparently he injured the elbow while swinging a weighted bat and may need surgery. Word is tests showed a "loose body" moving around in the elbow. Sounds like bone chips to me. The club is going to wait a couple of days and see if they settle down. If they don't, or if they move into the joint, surgery is the next step. Bad news for Moreland. He's already being blocked at first by Prince Fielder and missed a chance for significant playing time last year due to injury. This one could give him the injury prone tag and might cause the Rangers to looks elsewhere for a first baseman/DH.
Posted by Spiff at 11:20 AM