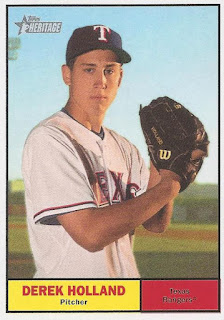 Ok, the title of today's post can refer either to Derek Holland's 2015 season or to the timing of this post. Holland, shown here on card 258 of the 2010 Topps Heritage set, missed the first part of the season with a left shoulder sprain. Since returning he has been a front-line starter for the team. As for the timing, I meant to post this yesterday, before the Rangers lost to the Padres last night. Didn't get it done though so it's late.

On Sunday the Rangers finished out a trip to Baltimore. Holland took the mound for the getaway game as Texas went for a sweep of the series.

Holland pitched quite possibly the best regular season game he's thrown since August 8, 2009 when he shut out the Angels on three hits. Against the Orioles Dutch went all nine innings and allowed just three hits while striking out eleven Birds. He allowed no walks and no runs en route to his eighth career shutout. It was an excellent outing and one that shows the pitcher Holland really is when he's on.

While Derek was doing his thing, the Texas offense was busy as well. They put up six runs, thanks in part to the now electric Elvis Andrus who went 2-for-3 with a walk, RBI, a run scored, and two stolen bases. Prince Fielder and Delino DeShields also had multi-hit games as the club raised their season record to 68-61.

The win gave Texas some padding in their hold on the second wild card spot. It also brought them to three games back of the AL West-leading Astros as Houston fell to the Twins. Against all odds, things are looking interesting in Arlington as the season enters the final month of play.
Posted by Spiff at 11:17 AM