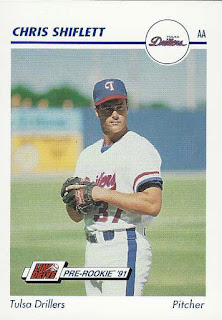 Chris Shiflett, shown here on card 598 of the 1991 Line Drive set, had a stabilizing season of sorts in 1990. It wasn't a blow the doors off year but it was better than the rough time he experienced in 1988 and 1989 or his injury-shortened 1986 and 1987 campaigns. The 1990 effort kept the former first rounder at Double A Tulsa for the 1991 season. Texas was looking for Shiflett to make some serious strides forward in his development.

Injury derailed the plan. Chris appeared in just four games for Tulsa in 1991 and pitched only nine innings. He got hammered to the tune of a 5.59 ERA and an 1.241 WHIP. He walked five but also struck out 12.

The Rangers had to be getting frustrated with Shiflett. 1991 was the third season he pitched fewer than ten innings. Maybe the prospect was too fragile to make it to the Majors. Only time would tell but that time appeared to be running out for Chris Shiflett's career.
Posted by Spiff at 11:00 AM