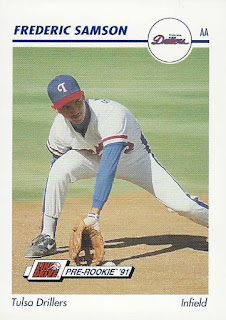 Originally drafted by the Tigers in the 14th round of the June, 1984 draft, Samson did not sign. The Rangers inked him as a free agent in May of 1986. Fred started his pro career that same year with the Rookie League Gulf Coast Rangers. He stalled out at Double A, bouncing from there to Single A in the 1988 and 1989 seasons. In 1990 he spent the entire season with the A+ Charlotte Rangers trying to get up to speed. He would be assigned to Double A Tulsa for one last try in 1991.

Fred appeared in 69 games for the Drillers in 1991 and made 240 trips to the plate. He struggled to a .208 batting average and a .304 on-base percentage. Part of his problem was that he was still looking for the hole in his swing, he struck out 63 times while getting just 25 walks. He had only spotty power: 12 doubles, one triple, and two home runs. Samson did score 31 runs but only accounted for 15 RBI himself.

Primarily a third baseman, Fred played there in 25 games. He committed four errors at the hot corner for a .927 fielding percentage. He also appeared in three games at first base and one game at second base with no errors. He had three miscues in the five games he appeared at short stop for a .909 fielding percentage there. Interestingly, Samson also played outfield for the first time in his pro career in 1991. In 20 appearances in the outfield he botched two plays and ended the season with a .929 fielding percentage.

Unfortunately for Fred Samson, he hadn't been able to deliver with Tulsa in 1991. After failing to hit even .210 at Double A in three stints, he found himself without a team following the 1991 season. He would sign with the independent Salt Lake City Trappers of the Pioneer League for the 1992 season. A single season with the Trappers would round out his professional playing career.
Posted by Spiff at 9:00 AM