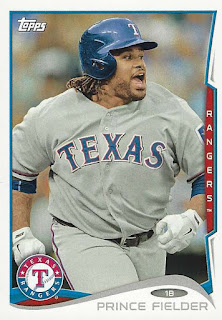 Well, the boys got the 2016 season off to a good start last night against Felix Hernandez and the Seattle Mariners in Arlington. Feels good to have baseball back and running and even better to kick things off with a win.

Texas starter Cole Hamels went seven innings, striking out eight while walking three. He did give up two home runs - to Kyle Seager and Robinson Cano. Still, it was a good enough performance to give Hamels his first win of the season. Jake Diekman came in and worked a scoreless eighth and Shawn Tolleson kept the Mariners silent in the ninth to pick up his first save of the season.

Meanwhile the Rangers bats were largely silent. Prince Fielder, shown here on card TEX-4 of the 2014 Topps Texas Rangers set, collected the only Texas hit - a single in the fifth. That hit picked up an RBI for Prince and tied the game. It also kept King Felix from no-hitting the Rangers on Opening Day.

While not hitting, the Rangers did manage to scratch out two more runs in the fifth on a series of walks and Mariner mis-cues. Added to the Fielder RBI, that gave Texas a 3-2 lead that they held on to.

While it is a bit troublesome that the Rangers bats weren't working last night, one needs to keep in mind they were facing one of the top starters in the game today. The lack of hitting will only get concerning if it continues when the team is facing lesser hurlers. Getting two unearned runs off Felix Hernandez is nothing to sneeze at though. It's the kind of never say die attitude that the team will need to survive the offensive dry spells as the season continues.