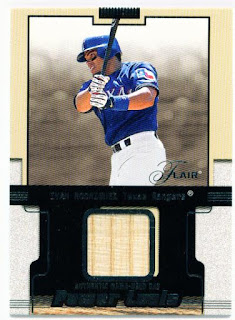 Well, after a great start to the Rangers 2016 season, the team seems to have stumbled a bit. The bullpen blew games on Tuesday and last night to drop to club to 1-2 on the infant season. While the guys in the pen were doing their part to lose, there were some positive points.

Yesterday new Rangers backstop Bryan Holaday made his debut. Acquired only a few days back from Detroit, Holaday had spent his time trying to get up to speed on the Rangers pitching staff and playbook. Apparently he was able to do so as he worked well with starter Colby Lewis. Bryan also threw out two base runners attempting to steal on him. Overall a nice intro for Holaday.

Not surprisingly, I don't have any cards of Bryan Holaday in a Rangers uniform. Former Ranger Ivan Rodriguez is going to stand in for him on this 2002 Fleer Flair Power Tools card that features a piece of one of Pudge's bats. Not that Holaday is to the caliber of Pudge, but the Rangers could use all the luck they can get right now.

Another bright spot in yesterday's game was Prince Fielder. He hammered a two run homer for his first long ball of the season. That's a good sign since Prince had average but didn't seem to have much power the first few weeks of last season. Of course, the Mariners hit nine home runs during the three game series so Fielder was definitely out-gunned.

At least the series is over. Time to move on to Anaheim for a series with the Angels. It would be good to see the guys put the opening series loss behind them and take the Angels.