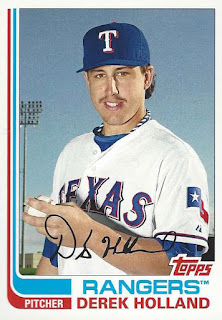 Well, the guys are looking good in their second go-round against the Seattle Mariners, this one on the road. Texas won the first game of the series on Monday night and last night Derek Holland took the mound for his second start of the young season.

Holland, shown here on card 88 of the 2013 Topps Archives set, pitched 6.2 innings. He struck out and walked two while keeping Seattle off the board. Andrew Faulkner finished out the seventh inning with a strikeout. Phil Klein tossed two flawless innings to complete the game. Just like that, Derek picked up his first win.

On the other side of the ledger, the Rangers went on a romp. Adrian Beltre led the way as he went 2-for-4 with a home run, double, and five RBI. Elvis Andrus kept up his quiet offensive revival with a 3-for-4 night that included a double and a RBI. Delino DeShields and Ryan Rua also went 2-for-4 and everyone in the starting nine, except Ian Desmond, had a hit, run scored, or RBI. By the time the dust settled, the Rangers had punched eight runs across on 12 hits. That's some nice run support.

Great to see the Texas bats wake up. You can't hammer your way to a winning season but having the offense is a definite must. Also good to see Dutch have a good outing. The Rangers are counting on him staying healthy and having a good year this year. It seems that the club's chances are much better if Holland lives up to expectations. Last night was a step in the right direction. Now it's on to this afternoon's game and possibly a sweep of the Mariners.