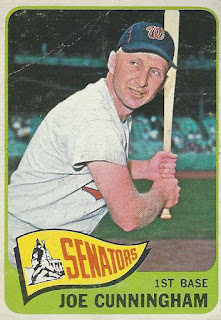 With a little league game and work scheduled for today, I am putting up a pre-scheduled post. Once more it's back to the Senators on Saturday. Of course, with the way the Rangers are playing in the early going, there may be a lot more Senators Saturdays during the season.

Joe Cunningham appears on a creased version of card 496 of the 1965 Topps set today. Cunningham came to Washington in a mid-season trade during 1964. That trade also netted the Senators pitcher Frank Kreutzer and sent Carl Bouldin and Moose Skowron to the White Sox in return.

Joe appeared in 95 games for the Senators in 1965 but only played in the field in 59 of those games. Off-season acquisition Dick Nen got six more games at first base to become the most used Washington fielder at that position. Bob Chance and Roy Sievers also appeared at first as the competition for the job went on. For his part, Cunningham played 412.2 innings at first base and committed six errors. That gave him a .986 fielding percentage as compared to the league average .991.

In 249 trips to the plate Joe raised his batting average 15 points to .229 and his on-base percentage 31 points to .375. That he was a disciplined hitter is demonstrated by the 46 walks he took compared to the 27 times he struck out. Not a real power threat, Cunningham did improve some on his power numbers with nine doubles, one triple, and three home runs. He also scored 29 runs and accounted for 20 RBI.

1965 had been a better season for Joe Cunningham than 1964 was. Unfortunately for Joe, that probably wasn't going to be good enough. He was eight years older than rookie Nen and the Senators were hurting for offense. Cunningham just wasn't contributing enough at the plate to catch on. After spending most of his career being blocked by Stan Musial in St. Louis, Joe was looking at once again at the possibility of being shoved out of a chance at a starting gig.