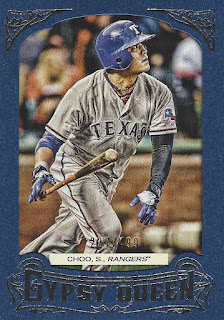 Well, the Rangers got some mixed results from their first road trip of the 2016 season.

Starting off with the good, the club went to Anaheim with a 1-2 record. They split the four game series with the Halos and left with a 3-4 tally. I'll take a .500 road record.

Texas prospect Nomar Mazara made his Major League debut last night as the team faced nemesis Jered Weaver. The Rangers lost the game 3-1 but Mazara went 3-for-4 with a home run. All three of Nomar's hits were off Weaver. Not too shabby for a young man who was supposed to spend most of the season at Triple A.

As to what derailed that plan, that's on the not good news side of things. During warmups on Saturday Shin-Soo Choo, shown here 2014 Gypsy Queen Blue Border card number 58 (numbered 227/499), was running sprints in the outfield. He strained a muscle in his right calf. That's going to put him out for four to six weeks. Texas will really miss Choo but at least they appear to have enough depth in the outfield to mostly cover for him for awhile.

If the Choo incident wasn't enough, Robinson Chirinos fouled a ball off his right forearm during Saturday's game. He had to leave the game right after the at bat. Examination revealed a fractured bone. That's going to put Chirinos on the shelf for ten to twelve weeks at a minimum. Not a good situation for the Rangers, who are very thin behind the plate this year. New Ranger Bryan Holaday now becomes the starting catcher for Texas and Brett Nicholas got the call up from Triple A to back Holaday. The other options for Texas are Chris Gimenez and Michael McKerny who were both in Spring Training with the club. Unfortunately both are down right now with injuries and unavailable.

Hopefully this is all the bad news for Texas for awhile. I don't mind saying it brings up all too recent memories of the beginning of the 2014 season and we all know how that turned out. For now though, things seem to be stabilized and the team looks to be able to carry on and pick up some wins. Tonight they start a series in Seattle and it would be good to see them take two of three to head back home at .500.