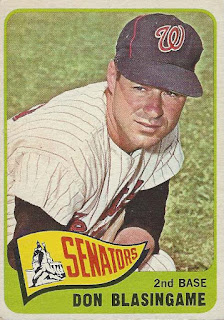 Coming off a decent 1964 season, Don Blasingame was looking to improve his offense and hold down the starting second base job in 1965. Blasingame, shown here on card 21 of the 1965 Topps set, had been a big improvement offensively at second for Washington but he needed to keep the bat going if he wanted to hang on to the job.

Once again appearing almost exclusively at second base, Don played in 110 games at second for Washington in 1965. He also pinch-hit a few times to bring his total number of games appeared in to 129. Over the course of 837.1 innings played in the field Blasingame committed eight errors. That left his fielding percentage at .984, seven points better than the league average .978.

Don made 449 trips to the plate for the Senators in 1965 and tallied a .233 batting average, 44 points below the previous season. He walked 35 times but also struck out 45 times as he watched his on-base percentage fall 33 points to .287. Blasingame still had some speed left in him as his eight doubles and eight triples attest. His power was fading though and he hit just one home run. He also scored 47 runs while accounting for 18 RBI.

1965 was a bad season for Don Blasingame. He managed to shore up his defense from the previous season but in the process lost a lot off his bat. At 33 years of age that was a bad sign. The Senators had seen this all glove, no hit before at second base and that's why they brought Blasingame in to start with. If Don wanted to hang on with Washington he needed to figure out a way to revive his bat. As it was, he would face at least two challengers for his job in 1966.
Posted by Spiff at 9:30 AM

This is Blasingame's final card, even though he played the entire 1966 season, with Washington and (I think) KC.

It is his final card. Rather strange that Topps cut him off like that.