Start of the Silver Boot. 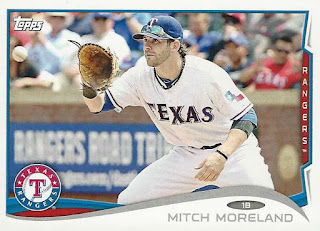 Well, the Rangers and Astros kicked off their season series last night as the 'Stros came to Arlington. As usual, the winner of the season series gets the somewhat coveted Silver Boot trophy.

Prince Fielder welcomed the visitors to town with a two-run home run in the first inning to start off the scoring. Ian Desmond singled in Adrian Beltre to give the Rangers a three run first.

Houston came back with two runs off starter Derek Holland in the top of the second. That would be all the runs Dutch would surrender as he battled through five with a high pitch count. Derek also picked up five strikeouts while issuing just one free pass.

With the exception of Keone Kela surrendering two runs in the seventh and Shawn Tolleson one in the ninth, that was all the Astros' scoring for the game. Meanwhile the Rangers put up a run in the third, two in the sixth, and a final run in the seventh. The final Texas run came on a solo home run by Mitch Moreland, shown here on card #TEX-16 of the 2014 Topps Texas Rangers set. Final: 7-5 Texas. Kind of neat to see the scoring begin and end with home runs.

Nice to see the offense clicking and putting some runs on the board. Also good to see Holland keep the team in the game in spite of obviously not having his best stuff. With the exception of Kela, the bullpen seems to have tightened down as well. Kela is a point of concern though. His ERA is now at 7.11 and he has not been consistently effective in relief. Hopefully he can pull it together before too much longer.