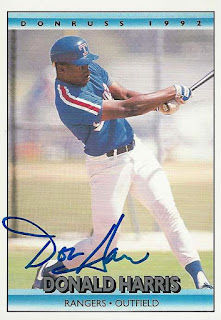 Well, the Rangers lost the final game of their road trip last night to the Mariners 4-2 in ten innings. That puts them at .500 as they come home to face the Red Sox tonight. Since they left on the trip a game under .500, I think one has to count the trip as a success. Hopefully they can keep the ball rolling as they return home.

Speaking of returns, I still have a few through the mail requests trickling in now and then. This 1992 Donruss card of Donald Harris was one that came in this past week. I sent it out on January 23rd. Mr. Harris was kind enough to sign it and a 1993 Topps card and return both of them. Also coming in was a success from former Ranger first baseman Will Clark. Thanks to both players for taking of their time to sign and return my cards.