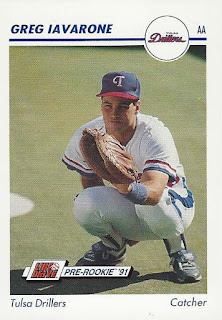 Of the five players who caught for Tulsa in 1991, Iavarone was fourth on the depth chart. He ended up appearing in just 12 games all season long. He did catch in 11 of those games and made two errors. That put his fielding percentage at .965 on the season.

Greg made 31 trips to the plate for Tulsa in 1991 and struggled to a .148 batting average. He had no extra base hits and scored just two runs while picking up only one RBI. He walked three times but eight strikeouts helped keep his on-base percentage at .258.

1991 was a disappointing season for Greg Iavarone. He watched as his bat evaporated and several other backstops passed him up in the Texas farm system. Due to the low number of games played, I suspect the Rangers released Iavarone before the end of the season. If not, they did so at the end of the season. 1991 would mark Greg Iavarone's final season as a pro baseball player.
Posted by Spiff at 9:00 AM