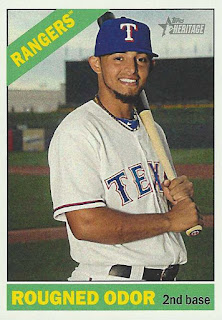 Something had to give last night as the Rangers welcomed the Orioles to Arlington to kick off a four game series. Texas got hot on their road trip and had Cole Hamels slated to take the mound against the O's. The Rangers were undefeated in Hamels' last 12 starts. On the other side of the ledger, Baltimore has gotten off to a torrid start and was carrying a 7-1 record as the got to the ballpark.

It looked like the Rangers were on the short end of the stick as the Birds knocked Cole out in the sixth. They were leading Texas 3-1 when Hamels took his long walk to the showers. Tom Wilhelmsen came in a tossed a double-play ball to end the inning and limit the damage.

In the bottom of the sixth the Rangers managed to tie the game. That brought Rougned Odor to the plate. Odor, seen here on card 412 of the 2015 Topps Heritage set, laced a double into left field to send two runs home and give Texas a 5-3 lead. The next batter, Elvis Andrus, singled to bring in Rougie and finalize the score at 6-3 Texas.

Keone Kela, Sam Dyson, and Shawn Tolleson came in succession from the bullpen and held Baltimore scoreless for the final three innings to nail down the win. Tolleson picked up his third save of the season while Wilhelmsen got the vulture win.

Always good to see a come-back win like this, especially against a hot club like the Orioles. Even better to see the bottom part of the lineup producing in critical situations. Between Andrus and Odor, the center infield is looking pretty good for Texas this season. Also nice to see the bullpen shake off their early season stumbles, put out a fire, and keep it out for three innings.