Cruz locks it down. 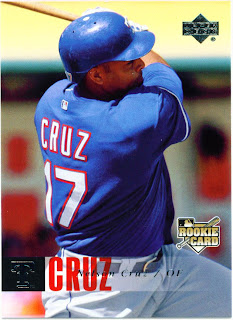 Nelson Cruz, seen here on card number 1199 of the 2006 Upper Deck set, will be the Rangers right fielder on Opening Day.

Ron Washington announced yesterday that Cruz had nailed down the starting slot. He will join Josh Hamilton and David Murphy in the outfield. Marlon Byrd looks to be the fourth outfielder.

This move seals the deal for Andruw Jones. He has to either accept a triple A assignment or hit the road. Unseating Cruz was his best chance of being in a Major League uniform on Opening Day; the contest was never even close.

Beating Cruz out would have been a tall order anyway. This spring Nelson is hitting .333 with three home runs and eleven RBI. That's with time away to participate in the World Baseball Classic.

Welcome to the starter's job Nelson, here's to hoping that your bat doesn't cool down as the summer warms up.
Posted by Spiff at 11:43 AM

I'm really glad to see that Cruz beat out Andruw. I just didn't want to see the redemption of Andruw this year.

The Brewers, although slow and dangerous behind the wheel, can still serve a purpose!

Glad to see Nelson grab a starting job for sure - the kid is a natural, I hope to see him succeed.

Looks like Andruw is a fifth outfielder possibility now. I like Cruz as well, seems like the Rangers at least got something for the guys they sent to Milwaukee.