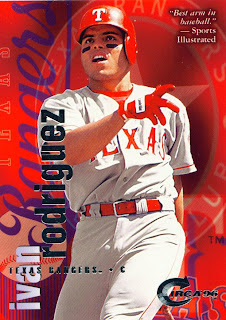 Decided to change format a little today and only post one Pudge card. Today we see Ivan on his 1996 Circa card, number 92.

I always liked these cards, even though they never really caught on. Probably it was the small blurbs about each player that appeared on the front on the cards. This one has a quote from Sports Illustrated saying the Rodriguez had the "best arm in baseball."

That statement is true. That's what caught my attention and drew me into collecting Ivan. His defense. His bat was pretty impressive and the speed was unusual for a catcher but it was his glove that seemed to gleam. Like a beacon it helped draw me back to following the game after the strikes of the mid-90's. Pudge was good, very good behind the plate.

When the steroids scandals started breaking I was horrified as one icon after another fell. I felt somewhat worried that perhaps Ivan might be among the guilty. There was no proof though. A mention in a book written by a bitter celebrity boxer didn't count as proof in my mind. The Mitchell report came out with no mention of Pudge. I was elated. Perhaps he had been clean. Maybe the man who gunned down Rickey Henderson with room to spare did it naturally. I relaxed a bit.

Then came the Alex Rodriguez tremor. Following that, AP did an interview with Pudge. Ivan, eager to sign with a team for 2009, answered every question. All except for one. The reporter asked him if his name was on the list with Alex's. He answered "Only God knows." What? Why no denial? Maybe because he just didn't want to seem guilty. Perhaps because he did fail. God isn't the only one who knows, so does Pudge.

Now I am at a crossroads. I don't condone cheating. I teach my son that cheating is wrong and that honesty is the only way. I just saw a co-worker lose a job that pays much less than Ivan's, for doing both. I currently have 1,447 different Rodriguez cards along with numerous figurines, posters, magazine covers, a book cover, and assorted other paraphernalia. The collection has taken much time, money, and effort to compile. My four year old son likes to wear his hat backwards "to be like Pudge."

I feel like Ivan looks on today's card. I just popped out to end the game with the bases loaded. I can't back up but I hesitate to continue to promote a possible cheater by my actions. With a heavy heart I am suspending my pursuit of Ivan Rodriguez cards. This is a suspension, not a complete abandonment. I will continue to keep lists and will trade for those I need that are offered. I will not buy any more unless I need them for my Rangers team sets. I'll leave it at that until one of two things happen; either Ivan clearly and convincingly denies PED use or I see proof that he used. One will free me up to continue my collection, the other will force me to make a hard decision.

Come on Pudge, help a guy out here. Did you use any sort of performance enhancing drugs?
Posted by Spiff at 4:29 PM

Reading this made me sad. It's tough having to doubt whether your favorite player was as legitimate as you hope. Hopefully, Ivan will come out soon and say "No way! Test me!"

I think this is why I am not a player collector.

To invest so much in one particular player only to see him let you down is depressing. I fully realize everyone is human and subject to mistakes and failings, but, to me, putting all your effort into one player implies that he's above all that, that he's to be put on some sort of pinnacle, something that probably no one deserves.

That is obviously just my opinion.

All the PED suspicions has tarnished perceptions of particular players' careers and really it is difficult to make a judgement on whether you choose to continue to support the player as a fan.

However, the bitter [failed] celebrity boxer has seems to be right on all accounts, right down to the other Rodriguez he knows.

I think it was all about the culture and how it was more prevalent to try and gain an edge, whether it was for strength to hit more home runs or for enduring a 162 game season.

I almost want to excuse personal favorites with the cliche:

To me, the question that has to be answered is this: what did he do AFTER? Let's say he used. let's say he quit using. Let's say he comes out and becomes a voice for 'righting a wrong' and in the name of prevention.

To me, that's one of the best things any of the players can do. Everyone makes mistakes, for a whole lot of reasons. But, what becomes the measure of a man is what he does AFTER.

There is a lesson in here for your son. He can still wear the hat backward, he can still 'be like pudge' without falling victim to the same things pudge did.

Look at players that have had affairs (or alleged ones) who are still regarded as the best. Yes, I know, an affair does not give one an advantage on the field, but it is still a character flaw, a wrong done.

Keep watching, keep following your favorite player. Wait until you see what he does AFTER before giving up.

Just to clarify a few points:
1. I haven't put all of my effort into Pudge, just a lot. My Rangers collection is much more complete.

2. I agree that often those who really want to win are the ones who end up cheating. Still a letdown though.

3. While I am disappointed that Ivan apparently cheated I am more disappointed about what he has done after. No admittal, no apology, just a weak dodge of the question.

Having said all of that, I appreciate everyone's comments and feedback. It is interesting to read the different opinions and views.

Well, you know that Pudge is one of my all time favorites and I too have concern about Pudge and steroids. In my head I feel like the odds are he cheated, in my heart I want to trust him. Until there is more proof I will continue to collect Pudge. I respect your position and don't blame you for changing your collecting habits.

Another of my favorites is Roger Clemens. This one has really hurt. I haven't bought a Clemens card in months and I don't intend to anytime soon. I would feel totally different about Roger if he hadn't so emphatically denied ever using and suing his accuser. If he had come out and apologized and explained why I would probably still be buying Clemens today.

And night owl, I have wondered often since this all started getting ugly why I just didn't stick to collecting sets.

Pudge was always a great competitor. He was the kind of guy you loved to have on your team and hated to be against you. He seemed to love tormenting the Yankees.