Nailing down The Hammer. 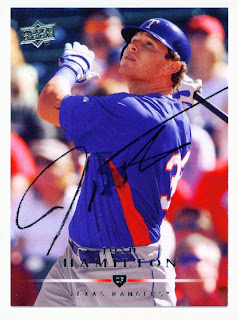 Not much news today from down Texas way. Tom Hicks is looking to sell some of his stake in the Rangers if anyone is interested. Chris Davis hit a late inning grand slam yesterday to finish off the Diamondbacks.

Perhaps the most interesting item concerns Josh Hamilton. Word is that the Rangers have made Hamilton, seen here on a 2008 Upper Deck card he signed for me last August in Kansas City, a contract extension offer. No details are available but he and his agent didn't care for the initial offer. Negotiations have begun.

It appears that the club is trying to lock Josh in long-term, much as they did with Michael Young and Ian Kinsler. It has worked out well in those two situations and would appear to be a wise course of action in this one as well. Early contracts help keep the nucleus of the team together and keep those teams with deeper pockets at bay.

Hopefully the two sides can reach a mutually beneficial agreement that keeps Hamilton in Arlington for a long while. Josh is a fan favorite and seems to be a genuinely nice guy. I got the feeling, while reading his book, that he has concerns about how long his body will hold up. He loves the game and enjoys playing it. He also has concerns about caring for his family. If those impressions are accurate, he should be more than open to the right long-term offer.
Posted by Spiff at 7:25 AM