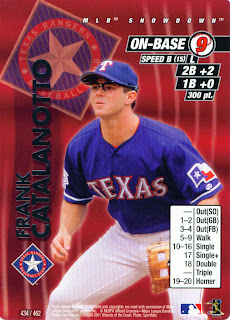 Sorry about the lack of posting yesterday. Two things conspired to prevent it. First was the fact that I am working third shift at work. That means less time during the day to post. The second thing was this 2001 MLB Showdown card of Frank Catalanotto, number 434 in the set. Well, this card and about a thousand others.

Mrs. Spiff and I had recently purchased a thousand card MLB Showdown lot on Ebay and it arrived the day before yesterday. As a result we have spent the last two days dividing, sorting, and trading. While Mrs. Spiff doesn't really collect cards, she does play the game. I play as well (with my duplicate Rangers) and so do my Dad and brother. Fun way to spend some time with the family but very distracting as far as regular blog posting goes.

While I was adding Cat's card to my collection, he was still in limbo with the Rangers. No word yet as to his Opening Day status. Adam Melhuse has been told that he won't be on the Major League roster on Opening Day, he's looking for offers from other teams but will hang it up if he doesn't get any. Looks like Dustin Nippert may be headed to the DL with back problems. Scott Feldman's role is still undecided, starter or bullpen? Lots of decisions still to be made before the season kicks off.
Posted by Spiff at 9:03 PM

Thats cool that ya'll all play the game. Do you play a season or just get together and play a few games?

We do both. My Dad and brother have about one team each built. My wife and I have several. We use one each in a four team league with my family. Comes to an eighteen game season. Right now my brother is in first place.

My wife and I use our other teams to play random games against each other.