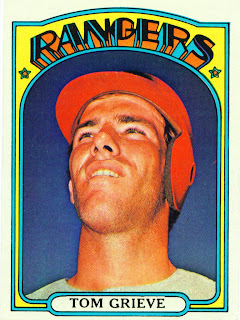 Lots of decisions still needing to be made in the remaining few days of Spring Training. With the exception of Andruw Jones, most of them involve the bullpen. Management is also continuing to talk to Josh Hamilton about a multi-year deal.

So far Jimmy Gobble has been released and three of the other bullpen contestants are down with injuries. Right now Jason Jennings is looking at a possible 'pen assignment and Scott Feldman is unsure on where he'll be. He looks to be on the roster but his role is not yet determined.

With all the management maneuvering I decided to post Tom Grieve's 1972 Topps card, number 609 in the set. It is somewhat puzzling exactly where the picture on this card came from. Tom played for the Senators in 1970 but spent the entire 1971 season in the minors before making the team with Texas in 1972. Surely in 1970 the photographer didn't think that the team would be moving two years later and he would need a picture that didn't show the team logo.

This card shows a young Tom during his playing days. I remember an older Tom serving as General Manager of the Rangers and later as a broadcaster for the team. He received a bit of attention as well as Ben Grieve's father. Both were taken in the first round of their respective drafts.
Posted by Spiff at 9:08 AM