I Don't Know is on third. 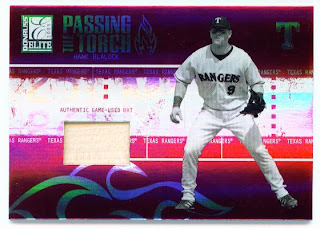 So now the Rangers have some utility infield issues. Apparently Omar Vizquel doesn't have the arm strength to play third base. Michael Young plays a lot of games each year but will probably need a break on occasion. Now what?

It seems like Hank Blalock, seem here on card number PT-16 of the 2005 Donruss Elite Passing the Torch set, might be the answer. Hank is starting at third today against the A's. The idea is to give him some playing time at third before the season starts so he can spell Young when needed. Apparently after passing the torch to Young, Blalock will be on hand to carry it on occasion if needed.

It is nice to see Blalock back in the field and I have always believed that the DH should not be a position, just an assignment. Having said that, I am a little leery of this plan of action. Does anyone remember why Hank is now the DH? Yes, his shoulder gave out and he couldn't play third anymore. Now the plan is to have him play once in awhile? If he tears something up the team will be without a backup third baseman and will lose his bat at DH. Ouch!

I have no problem with Vizquel but I wasn't wild about his signing because he had never played third. I know the intangibles are worth something but are they worth an arm and a leg? How about just Blalock's arm?
Posted by Spiff at 12:05 PM