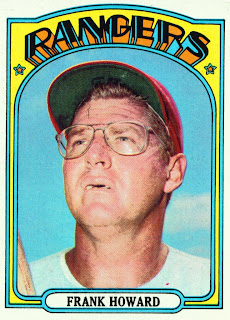 Not much to report in the current season so it seemed like a good time to take a trip back to 1972. Today we have card number 350 from the Topps set, Frank Howard.

The Senators got Frank in a trade in 1964 from the Dodgers. At the time it probably seemed like a gamble. The 27 year old outfielder had only topped 30 homers once and that had been in 1962. He had driven in 119 runs that year as well but had never even gotten to 90 in the other six years he played for the Dodgers. Small expectation that Frank would ever become a franchise player.

Apparently the change of scenery was good for Hondo. After a couple of years to adjust, he took off. 1967 was his breakout year as he logged 36 homers and 89 RBI (the most in a year for him since '62. Of course, he also led the league in strikeouts with 155 Ks on the year.

Frank didn't let the year of the pitcher slow him down at all. His batting average stayed the same as in '67 and his slugging percentage jumped 41 points. He led the league with 44 homers and drove in 106 runs. He also was named to his first of four All-Star teams.

In 1971 Frank ran out of gas. His homer total dropped to 26 and he fell well short of 100 RBI. For the first time since 1967 his slugging percentage dropped below .500. After the season he made the move to Texas with the rest of the team.

After being a bright spot in the Senators' gloom, Frank played only 95 games in a Rangers uniform. He was sold to Detroit in August of '72. One more full season there and Howard hung up his cleats.

I think the large ballpark at Dodger Stadium hurt Howard's power numbers there. Plus, the Dodgers were built on speed during the early '60s (Maury Wills, Willie Davis, Tommy Davis) and Howard didn't really fit into those plans.

True. I hadn't considered the speed issue. Part of the problem with not being familiar with the Dodgers of the time.