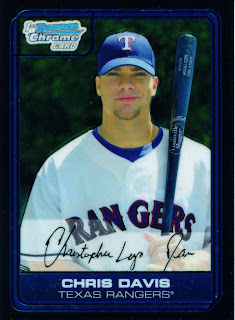 The Rangers are back in sole possession of first place in the A.L. West. With their 12 inning win over Arizona last night they are now a half a game over the Angels who didn't play.

While there were several areas of concern last night, it seems possible that Chris Davis may have broken out of the doldrums offensively. Davis, pictured here on card number DP29 of the 2006 Bowman Chrome Draft Picks set, had what might have been his season best game at the plate. In six plate appearances he had one walk and four hits. He had one strikeout but left no men on base. His four hits included a home run and double. He pushed in two RBI and scored two runs of his own.

All that from a guy who had only been seeing first base when he went out to play it. As a sign of how bad things had been, the night pushed his average up to only .209. Hopefully the nightmare is behind him and the rest of the Rangers offense. It would be nice to see both Davis and the team back in the saddle again. Only time will tell.
Posted by Spiff at 12:13 PM