Back into the swing of things. 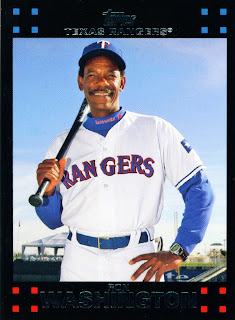 Sorry about missing the past few days. Had to drive down to Texas and back for a funeral. My Mother's father passed away last Tuesday. He was 97 and in failing health, so the news was not unexpected. From him I get my interest in reading and history. Perhaps also a bit of my baseball addiction as well. While he did not keep up on the modern game, my grandfather could talk the Yankees of yesteryear as well as the next person. He had been to the old Yankee Stadium and had seen them play. Berra, Mantle, Maris, and Ford weren't just players in old photos for him. Perhaps his favorite was Joe DiMaggio. Fit his Italian heritage I guess. He would occasionally look at me and my brother sorting cards on the floor and speak reverentially about the Yankee Clipper. It was fascinating even for a non-Yankees fan. Several years back he gave me a small stack of programs and souvenirs he had picked up at games. I really need to dig them out and take another look.

Over the weekend the Vicente Padilla cleared waivers and then pitched a solid game to defeat the Red Sox. The Rangers went 3-3 in a six game road trip to Fenway and the Belly of the Beast. Not too bad. Took the series in Boston, first time in close to a decade to do that. Josh Hamilton appears to be headed for surgery and a recovery of four to six weeks. Ouch! The Rangers also picked up manager Ron Washington's contract option for next year. I think that was a great move. The players like and respect Washington and he seems to have really improved the team's defense. Now let's see if the guys can use an extended home stand to move up some more on the rest of the division.
Posted by Spiff at 1:10 PM

Sorry to hear about your loss. He must have had some amazing stories; it seems he was able to see quite a few baseball legends in his time.

Although the Rangers have a good record, it’s just difficult to take the Ragers seriously. Are they going to tank again once the summer heats up? Time will tell & I hope that you won’t stop supporting your team!!! Just read about them here:
http://www.rangerszone.com

Sorry to hear about the loss. May our Lord be a comfort to you and your family at this time. Tim

Thanks for the kind words.