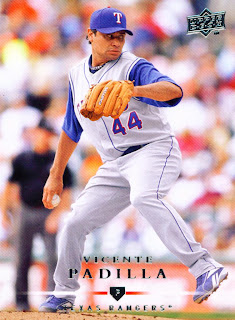 Texas managed to even their series with New York last night as they edged the Evil Empire 4-2. Scott Feldman turned in a strong performance as he picked up his fifth win of the season. Frank Francisco snagged his twelfth save of the year. Nice to see the team bounce back from the previous night's trouncing.

Vincente Padilla may not be bouncing back though. Word is that the Rangers put him on waivers yesterday following his using Mark Teixeira for target practice. Padilla, seen here on his 2008 Upper Deck card number 670, is 3-3 on the season with a 5.57 ERA. He does have a history of throwing at batters though and has already hit seven this season.

Like I said yesterday, I have no problem with throwing at batters, if it is done in the right situations. If done to protect your batters I think it is appropriate. If done just to pick a fight it is inappropriate. When done to pick a fight and it loads the bases with Alex Rodriguez coming up it is just plain stupid. It seems that Vicente will have some time to ponder the differences.

Quick programing note - I will be unable to post again until probably Tuesday due to a death in the family.
Posted by Spiff at 11:34 AM

Sorry to hear about your loss. Look forward to seeing your posts on your return.