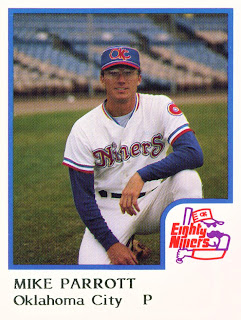 What a horrible weekend for the Rangers. They should be in second place by now. The only reason they aren't is because Anaheim has been kind enough to lose as Texas does. The collapse left me wondering what happened to the guys. That made me decide that today might be a good time to dig into the minor league cards and play "Whatever happened to that guy?"

Today's contestant is Mike Parrott. He is shown here on his 1986 ProCards Eighty-Niners card. Having never heard of Mike, I had to do some research. What I found is that this card was about the end for Mike. He played for OKC in 1986 and then hung up the spikes. That's not the whole story though.

Mike was drafted in the first round of the 1973 draft by the Orioles. He was the 15th pick overall. It would take him four years to make it to the big time. He was a September call-up for the Birds in 1977 and appeared in just three games for them. In December he was dealt to the Mariners. Mike then proceeded to put in four years for Seattle. In 1980 he split time between the big club and the minors. In March of 1982 the Mariners traded him to the Brewers for Thad Bosley (who would later spend parts of two seasons with Texas). The Brew Crew released him later that month. In May he signed with the Royals and spent the next three seasons in their minor league system.

He then somehow went to the Rangers (I was unable to determine how). Two seasons with OKC and it was over. At least Mike could say that he made it to the bigs. That was more than his brother could boast of since he never made it out of the minors.
Posted by Spiff at 10:47 AM

What is with those glasses?

hey i have a bunch of those 1993 keebler ranger cards that they passed out at the home games in Arlington. 27 of them. Gary Redus, Jose Canseco, Bill Ripken, Geno Petralli, Ivan Rodriguez, John Russel, Willie Upshaw, Jackie Moore, Dave Oliver, Craig Lefferts, Chris Carpenter, Mike Schooler, Kenny Rogers, Jeff Bronkey, Robb Nen, Bob Patterson, Nolan Ryan, Kevin Brown, Brian Bohanon, Charlie Leibrandt, Roger Pavlik, Matt Whiteside, Jon Shave, Steve Balboni, Steve Dreyer, Jeff Fyre, and a checklist. I was a kid in 93 and went to the home games. If you want them you can call me at 817 733 4732 they are in great condition. Sorry to annoy but i came across your posting on them and you mentioned that they were hard to come by. Make me an offer if you want them. I could even meet up with you at the Ballpark in Arlington. Have other rangers cards if you're interested.

David - The glasses may be accounted for by remembering that the picture dates from 1986.

Brian - Thanks for reading and leaving a comment. I'll consider your offer.