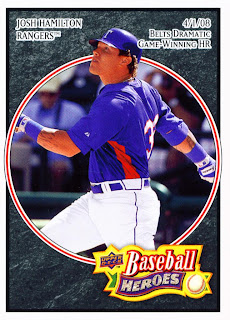 Today we see Josh Hamilton taking one deep on the charcoal version of his 2008 Upper Deck Heroes card, number 12. Better enjoy the picture. There is a very distinct possibility that we won't see Hambone at the plate for quite a while.

The Rangers put Josh on the 15 day disabled list yesterday before the start of the series in New York. The placement is due to what was finally diagnosed as an abdominal strain. The prescribed treatment right now is rest and anti-inflammatory medications. The Rangers are saying that this is somewhat similar to, but hopefully not as serious as, Ian Kinsler's sports hernia that cost him the last six weeks of last season. If the injury does not respond to the medications and rest there is the possibility of surgery. That could cost Josh at least eight weeks. Brandon Boggs has been called up to replace Hamilton, hopefully for just a fortnight.

I had to work last night so I missed the beating that the Yankees put on the Rangers. I also missed Vicente Padilla hitting Mark Teixeira twice. I did watch a clip this morning of Teixeira biting his lip and talking to the media about the proper way to play the game. What a hoot, Mark Teixeira pretending to care about the game. Probably the bigger problem is that he realized he didn't have a clause in his contract to give him yet more money whenever he got hit.

Anyway, did anyone else see or listen to the game? Were the plunkings intentional? If they were then Padilla was just plain stupid. You don't load the bases twice for Alex Rodriguez in New York. Not a way to keep from getting shelled. Not smart ball either. I have no problem with throwing at opposing players but it should be done in retaliation, not to pick a fight. To do so when it might well cost your team the game is a very real reason to have your head examined.

There is one thing that should also be kept in mind. With Derek Holland trying to break into the rotation Padilla and the rest of the starters need to be careful, the weakest link will fall first.
Posted by Spiff at 11:35 AM

Games such as these can make or break your season. They need to keep their heads. Tampa found it tougher last year when teams began to take them more seriously. The Rangers need to deal with it in a mature way and play the same great baseball they've played until this point.

The first plunking was questionable though probably intentional. The second one was intentional in a "no doubt about it" way.

Thanks for the comments. It is sounding like Padilla just lost his head.