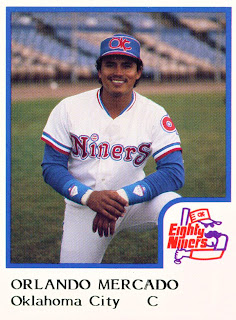 Well, I hope that everyone enjoyed their holiday yesterday and took time to thank The Provider for all their blessings. Among my blessings I count baseball cards. More to the point, the fact that I have the extra income and time to collect them.

Today's card is from the 1986 ProCards OKC Eighty-Niners team set. It pictures catcher Orlando Mercado. Orlando's grin says that he has tasted the success of being in the Majors and expects to be there again.

In fact, that was just the case when this picture was taken. Orlando had been playing pro ball since 1978 but only came to the Rangers' organization in 1985. The Rangers had to give the Mariners Donnie Scott in exchange. At that time Orlando already had three Big League campaigns under his belt with the Mariners in 1982, '83, and '84. He would spend the 1985 season and part of 1986 in OKC before getting the call to Arlington.

Before getting called up in 1986 Mercado played in 48 games for the Eighty-Niners. He managed a .273 batting average with a .401 slugging percentage. Baseball-reference.com has only sketchy offensive stats for him and no defensive numbers so that's about all I know. Whatever isn't there must have been impressive enough to get him called up though.
Posted by Spiff at 5:13 PM