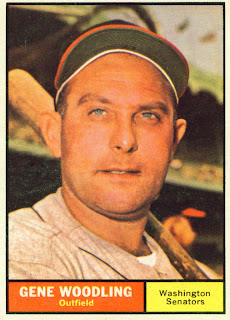 After the 1960 season the Senators moved to Minnesota and became the Twins. The Capital City wouldn't be without baseball for long though as MLB placed an expansion franchise there the same year. The new team was also called the Washington Senators. That team would play in D.C. for ten years and move to Texas after the 1971 season. As a Rangers collector I have occasionally picked up Senators cards dating from 1961 - 1971. I figured it was only appropriate since that team was the franchise that became the Rangers. I have also decided to feature these pre-Rangers cards on some Saturdays when there is no Rangers news. Any feedback as to this idea would be appreciated.

To kick the series off we see Gene Woodling on card number 275 of the 1961 Topps set. This set is similar to the 1972 Topps set in that every effort is made to avoid showing any kind of uniforms or team logos. I guess that is why Gene's cap is tipped back.

Washington drafted Gene from Baltimore in the 1960 expansion draft. By that time Gene had 17 MLB seasons under his belt and had played for six different teams. He kind of looks a little worn and weary in this picture. In 1961 Gene would play in 110 games for the Senators. He would post a .313 batting average with a .403 on base percentage. This was good enough to lead the team in both categories. In the course of the season he would knock in 57 runs (3rd on the team) and commit only two errors. It really is a wonder that Gene wasn't the All-Star representative for the team.
Posted by Spiff at 1:35 PM

Great idea. I hope you continue with Senators Saturday.