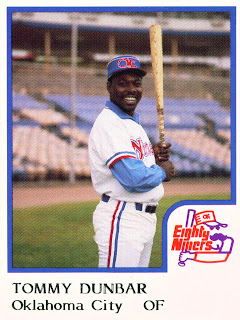 Looking at Tommy Dunbar's 1986 ProCards card today. Tommy is having a ball as he models the windbreaker under the jersey look. I mean, just look at that grin. The guy can't be faking that.

Tommy was pictured on both minor and major league cards in 1986. By the time this card came out though Tommy's big league career was over. In 1980 Tommy was drafted by the Rangers and signed. He made his first major league appearance in 1983 as a September call-up. He wrapped up his MLB career in July of 1985.

After that Tommy didn't give up though. He played in the minor leagues until 1991. 1986 would be his last season with the Rangers organization. For the next five years he bounced around between five different organizations.

Two interesting notes on Tommy. While he was mostly an outfielder he did pitch in three games for Memphis in 1990. He went a total of three innings and posted a 3.00 ERA. Not too bad. The other interesting item is Tommy's managing career. In 1993 he managed for the Reds in the Rookie League. He lasted just one season at that endeavor and posted a losing record. Quite the varied career.
Posted by Spiff at 6:25 PM