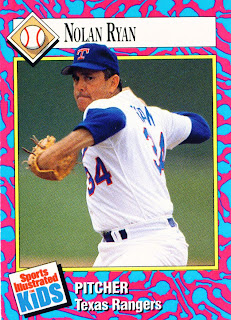 Omar Vizquel and Andruw Jones both filed for free agency yesterday. Since I don't have cards of either of them I am posting this 1993 Sports Illustrated for Kids card of Nolan Ryan. The only possible connection might be that Nolan is still involved with the team and was a great free agent signing for Texas 21 years ago.

As far as Vizquel is concerned I would like to see him back next year. I wasn't really familiar with him before this past season but I liked what I saw on and off the field. He would be very helpful in a close pennant race. The big question will be if Omar will agree to stay in a utility infielder role.

It looks like to me that the team should let Andruw go. Nolan and the rest of the administration seem to agree as there are no plans to try and hang on to Jones. Andruw didn't have a bust of a season like he did in '08 for the Dodgers but he wasn't his old self either. I still don't think the Rangers should have let Frank Catalanotto go to keep Jones.
Posted by Spiff at 7:40 PM

Our luck would be that they are released, signed by someone else and do really well for them.