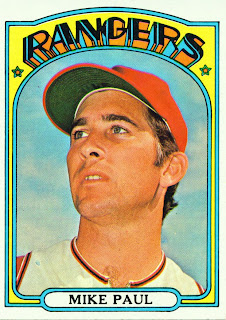 Time for another trip to the Rangers' first season. Here we see Mike Paul on card number 577 of the 1972 set. Mike is styling his airbrushed cap and Cleveland Indians sleeveless jersey.

The Rangers obtained Mike in a trade with Cleveland in December of 1971 that also netted them Ken Suarez, Rich Hand, and Roy Foster. At the time Mike was busy bouncing back and forth between the Indians and the minors. In 1971 he had posted a dismal 5.95 ERA and a 2-7 record in 12 starts.

Apparently the move to Texas agreed with Mike. In 1972 he would experience the best season of his career. While his record was 8-9 in 20 starts and 49 games that is a bit deceiving. His ERA was a respectable 2.17 in 161.2 innings pitched. He struck out 108 on the season while walking just 52. Most notably, he allowed just four home runs all season. Perhaps if Mike had gotten some run support a few of those losses and no decisions might have slipped into the win column.
Posted by Spiff at 5:52 PM