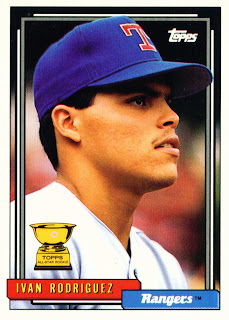 Texas offered arbitration today to Marlon Byrd and Ivan Rodriguez. This seems to be a good move. The team has little to lose and will receive extra draft picks should these guys move on. It would be nice to hold on to both but either can probably be replaced.

Pudge, seen here on card number 78 of the 1992 Topps set, is in the twilight of his career. His skills are fading a bit and his playing time has been diminished the past couple of seasons. This could result in a favorable result for Texas should he choose to accept arbitration. With the trouble that he had signing on last year he may just decide that arbitration is his best option. Hopefully that is the case as it would be nice to see him stay in Texas.

As for Byrd, his numbers have been consistently good and he is younger than Pudge and perhaps approaching his best years. This could raise his price. A raise might be worth it to the Rangers though. Of course, should Byrd decide to fly he is likely replaceable from the farm system.
Posted by Spiff at 6:13 PM