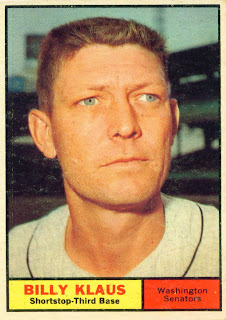 Today's Senators card is number 187 in the 1961 Topps set and features Billy Klaus (no relation to Santa). Billy is going hatless in his Orioles jersey.

The Senators drafted Billy from Baltimore following his eighth Big League season. Billy was the utility infielder for Washington, appearing in 91 games in 1961. 51 of those appearances were at third base, 18 at shortstop, 1 at second base, and 2 in the outfield. In the rest of his appearances Billy didn't take the field.

Billy made eight errors that season while posting a .965 fielding percentage. On the offensive side of things he posted a .227 average with a .311 on base percentage and a .359 slugging percentage. Billy managed seven home runs and 30 RBI. He struck out 34 times while walking 30.

In April of 1962 the Senators sold Billy to the Philadelphia Phillies.

One thing about this card that always struck me was how weathered Billy looks. I would have placed his age in his early 40's. In reality he was 32 years old in 1961.
Posted by Spiff at 12:01 PM

This would have been a great card to post on Christmas!

Agree with you 100% Always say that ballplayers from years gone by look a lot older than what they are.