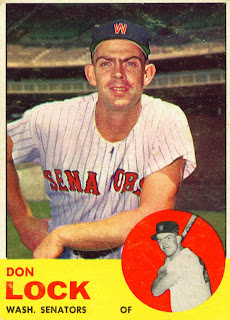 Hope that everyone had a great Christmas and was able to enjoy themselves with family and loved ones.

1963 was Lock's first full season with Washington. He moved from left field to center, replacing Jimmy Piersall. In 149 games Don appeared in the field in 146. 134 of those games were in center field where he logged over 1,000 innings.

While on defense Lock posted a .980 fielding percentage, one point below the league average. He successfully handled 391 chances while committing eight errors. About average.

Offense was Don's specialty though. While his .252 average wasn't that impressive his power numbers were. Don's slugging percentage was .446 as he led the team in that category. He also led the team in RBI (82), doubles (20), walks (70), and strikeouts (151). Those are numbers that indicate a power hitter.

The team-leading 27 home runs (6th in the A.L.) also showcased Don's power at the plate and delighted Senators fans. Not only did Don lead the team in 1963 but he set a new high water mark for homers for the franchise. This was the first time since the team was founded in 1961 that any Senator hit over 18 home runs in a season. At last Washington had a hitter that other teams didn't want to see come to the plate.
Posted by Spiff at 12:01 PM