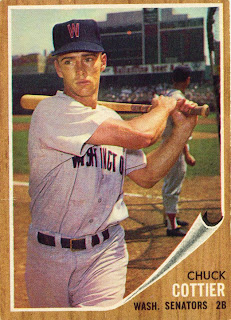 My Senators collection is not nearly as extensive as my Rangers one. That means that the four 1961 Topps cards that I have posted during the first four Senators Saturdays are the total that I have from that year.

That moves us on to 1962 and Chuck Cottier on card number 27 of the Topps set. This is the only card I have from this team set. It is also the first card in my collection to show the Washington "W" on the cap.

The back of the card shows Chuck wrapped up in an overcoat and scarf as he arrives in Washington in the middle of a snowstorm. It is doubtful it was snowing in Washington when Chuck arrived. The Senators traded for him on June 5, 1961. In return they sent Hal Woodeshick to the Tigers.

In 1962 Chuck served as the Senators' primary second baseman, appearing in 136 games. In all but two of those games he appeared at second. The other two were pinch-hitting appearances. He posted a .981 fielding percentage while taking part in 100 double plays. In 736 chances he committed 14 errors. That made him about average for the league that year (the league average fielding percentage was .980).

On the opposite side of things Cottier compiled a .242 batting average. That included a .341 slugging percentage and a .310 on base percentage. He had six home runs and 40 RBI. He tied for first in triples (6). He was second on the team in stolen bases (14) and caught stealing (8). He was third on the team in walks (44) and strikeouts (57). All in all a pretty average offensive season that about matched his defensive play. In spite of that, 1962 would be the best offensive year of Chuck's nine year career.
Posted by Spiff at 1:46 PM

Thanks for the offer but I really have no use for pre-1961 Senators cards. That team went to Minnesota and became the Twins. The franchise that became the Rangers played its first season in 1961. Topps managed to include that team in its release because the expansion draft actually took place in December of 1960. Thanks for the offer though.

I remember Chuck as a Cubs coach though I can't remember if it was 1st or 3rd base.